Just like how diverse Canada is with its natives and immigrants (of course, topped by Filipinos with 15.6% of the total adoptive citizens), food tourism is what they must be very proud of. And in Toronto, being the largest city in Canada by population, lies a bright concrete jungle that will take you to another realm (especially if you are from the tropics like the Philippines in my case).

Since its my first time to go there from an exhausting, no-sleep-apocalypse work in New York, I think I had one of the best short vacations of my life’s notepads. 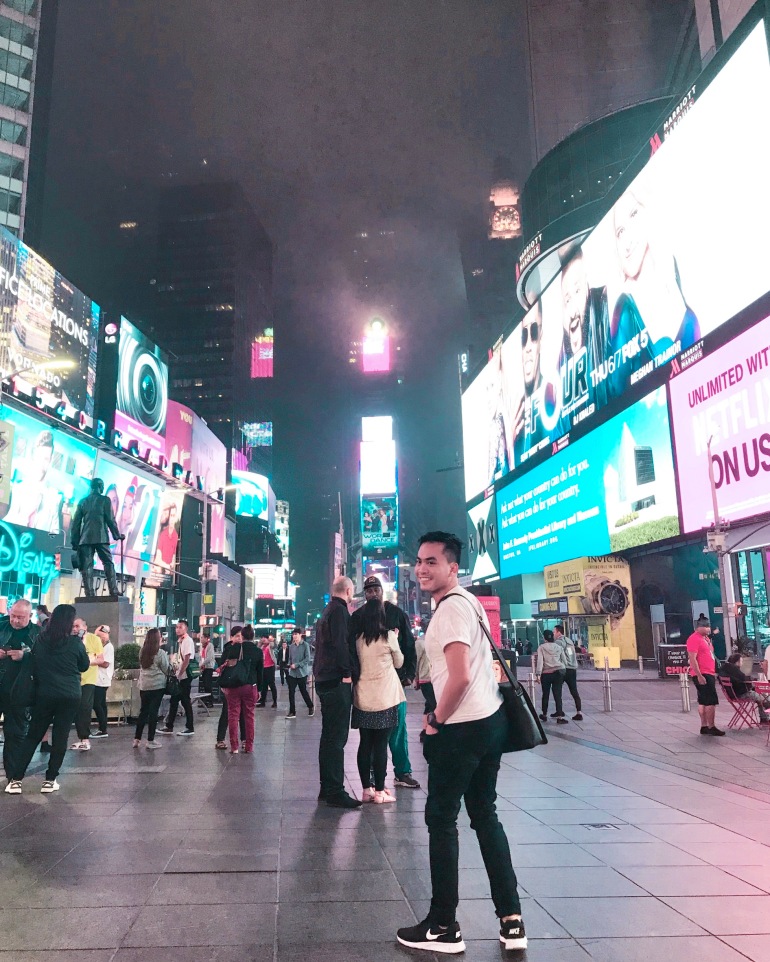 For four days, I was the king of the grill with my Aunt Diday and Uncle Paul’s welcome treat with my cousin and Aunt Lally.

After years of virtual communication, my Uncle picked me up at T. Pearson Airport because my Aunt still had to catch things at work and get done for my short stay at their beautiful home in Mississauga. It was just the “family emergency” reason that gave me and my Uncle almost whole of the afternoon to ourselves just catching up and touring around their house (they want me to call my “home” too which makes it sweeter). And that family emergency thing turned our quite well for him I guess. 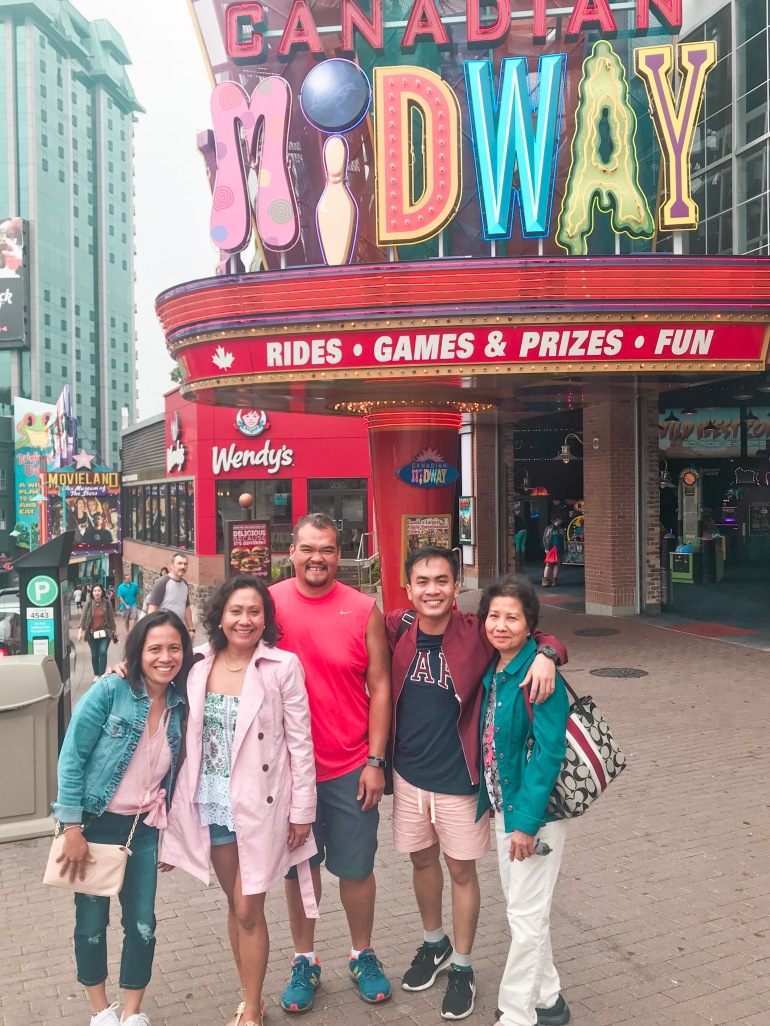 My Uncle and I tried to prank my Aunt: that I fell asleep and got so exhausted and tired from work and travel. When I was about to surprise her in the living room, she suddenly came out of the kitchen and I got the dose of my own medicine. But that was one of the sweetest moments ever – seeing your family on the other side of the world.

Now I know this is about all the gastronomic experiences I had but you know, sometimes, the taste of the food you eat depends on the people you eat them with. And with all the laughter, the “yeahs” and the “ano sang ano”, only a family can understand – the truest essence of food being shared to the people you love. 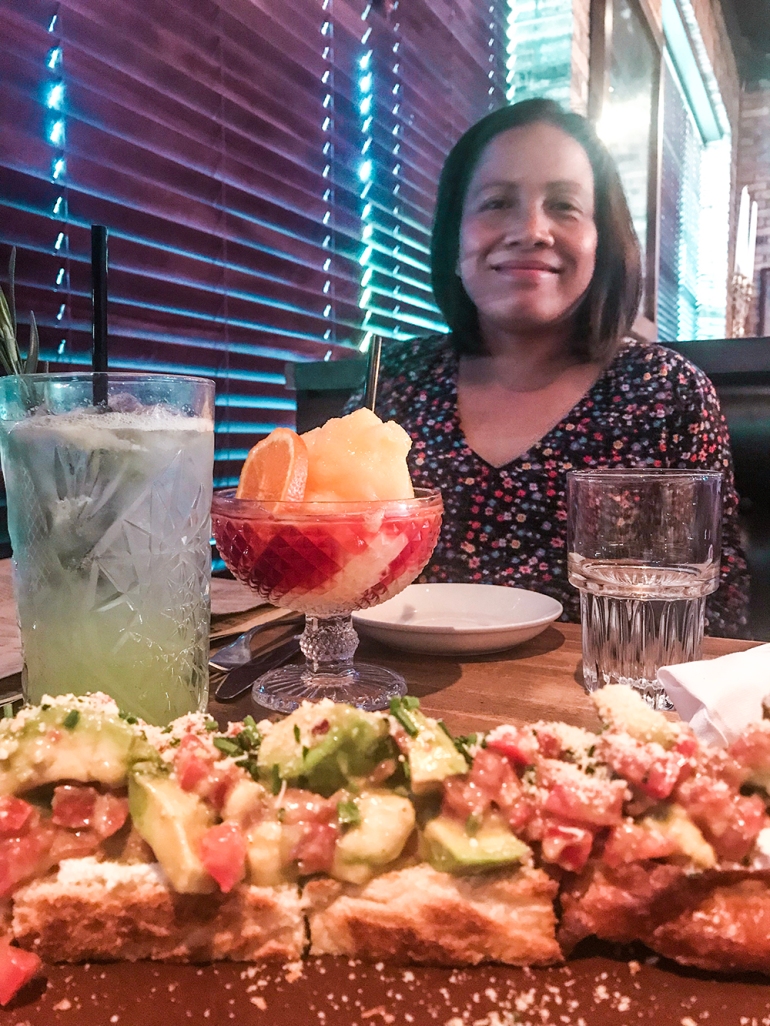 I would really like to share photos of our first meal together but I was so hungry that I ate everything that I could. We had the braised lamb shank with artichoke salad with corn and olives, sautéed mushroom with cream corn. It kind of looked like this but darker and a bit bigger I guess —> Braised Lamb Shank. I did not really like the smell but the taste overpowered it.

Just when I though that that was dinner already, I was wrong. After we picked up my cousin from her workplace, we went to another restaurant named Scaddabush Italian Kitchen and Bar and meet Gee Wee, one of the nurses I met during my Aunt’s Medical Mission in the Philippines whose place in Jamaica now I want to visit. So, yes, for dinner. Again. ‘Coz at 9PM, the sun is still up in the other side of the world while in the Philippines especially in Guimaras island where I came from, it is starry and already a  dreamy night.

For starters, we had fresh mozarella with fig jam and avocado bruschetta and prusciutto. With the sound of it, I had no idea what they were. And when they came on our table, I was like, “oh, this is just the appetizer”, in the Philippines, we call it “snacks”. Haha!

While I wished to get some rice meals, I held on to my faith of, even just for a few days, be Western for my stomach (which is pronounced /stʌmək/ NOT /sta-mak/ as my Aunt taught me), of which I somehow managed to keep up with. Then, we had these spicy shrimp pasta which was sooo good (except for the pasta itself which I think was overcooked or maybe so the real Italian style); the pasta bolognese which is a bit common in the cities next to us, pasta with biggest meatball and penne pesto pollo.

Aside from the feeling of having those foods, I somehow struggled for I was seated in the middle of my Aunt who is like native English speaker and of course, Gee. Staring at my cousin, I felt like I needed a bundle of tissue to wipe off my bleeding nose (a Filipino way of describing if you are in a tough situation of being forced to speak English but you run out of words kinda like that feeling, haha!). But the food got the better of that #AwkwardMoment. I talked to myself (which I usually do if I need to decide on something) and realized that I needed to talk, in English *eyes half-closed*.

On the next day, I had the best sleep after almost two weeks of working so hard. I have experienced the no-rice breakfast which was surprisingly yummy. How the food complemented each other was cool. I think I had five blueberries, a slice of Ezekiel bread (made from sprouted grains and doesn’t contain added sugars) spread with thick chunky peanut butter. The half skinned and soft-boiled, skin is a bit fully set and the yolk is raw. And to balance the “malansa” taste of the egg, fork a blueberry, chew it up well and the fishy taste? Voila. All gone. So, that is how you basically do it. Then with a bite of the chunky peanut butter, a sip of a very strong blue mountain cappuccino from Jamaica made the morning alive, ready for City Tour!

We visited Steam Whistle in the middle of the city just next to CN Tower, the world’s tallest free standing structure. I think we had a pint of beer at around 11:00 am to celebrate the birthday of my Uncle (first alcohol intake for the day).

After the Lake Tour, we had lunch at Amsterdam where I had lemon chicken shnitzel (I was lucky I got one of the best-sellers), smoked turkey sandwich, brisket and veggie burgers.

It was such a beautiful day as we were seated next to the window where we could see the yacht, the birds and the people going to and fro the port. 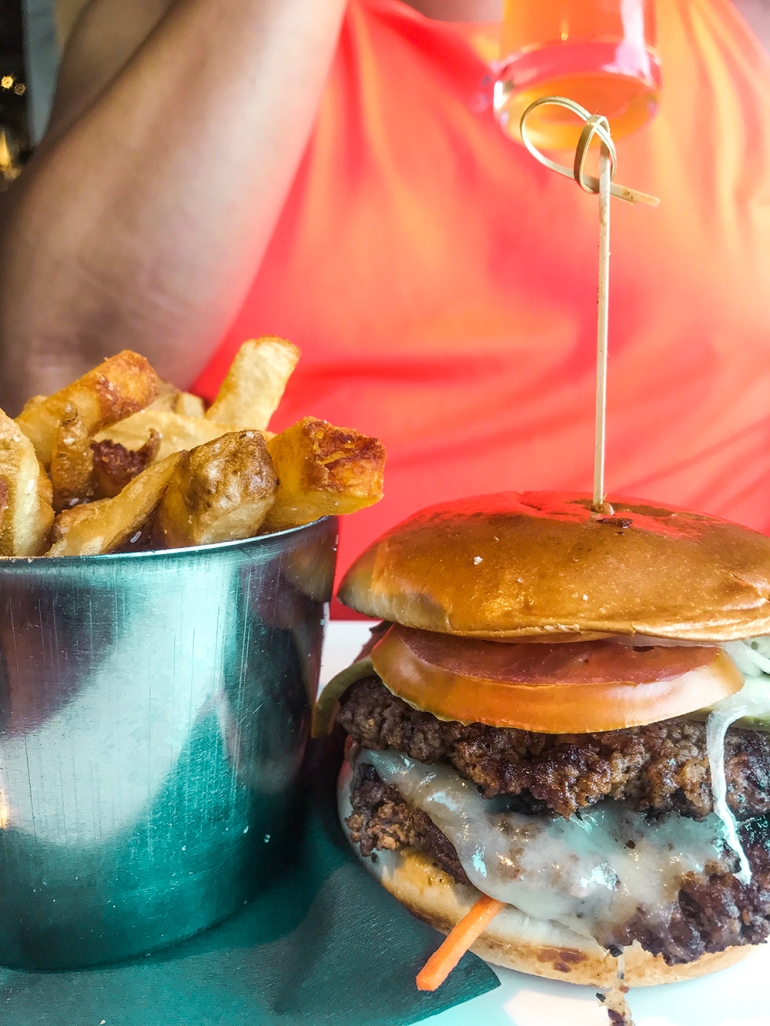 After we checked in, I took a deep breath getting ready for a long walk maybe to the steak house for dinner but surprisingly, just a few steps out of the hotel, my Aunt and Uncle entered a restaurant named Bardi’s Place.

The waiter was maybe Italian so when my Uncle ordered in fast paced slang way “BBQ rib starters and fried calamari, please”, he could not understand; so, I delivered it in Italian accent and he got it right! So cute.

Bardi’s is a traditional steak house which started operating since 1966. Located in Toronto’s theatre and financial districts, it has book of different wines (yes, not the ordinary few flips of the menu but almost like a book) and your choice of certified angus beef paired with baked potato, hand cut fries or rice.

Since it was steak night, I ignored surf and turf, and rock lobster tails and had the hardest time picking amongst top sirloin, filet mignon and New York cut. I ended up choosing the biggest one, Bardi’s special, their signature bone in rib steak (20 oz!). Don’t judge, my Aunt and I shared it, including the baked potato with sour cream.

After the dinner, we went bar hopping with the Toronto city lights. I think we went to six bars but I only noted 5. Maybe jager kicked in so good.

Gin tonic at Elephant Castle with the rude lady. Amsterdam with Canadian Club is as light as whiskey and some shots on the house for the birthday boy, Uncle Pabs.

Town Crier Club and La Trappe Quadrupel 8% I got it bottoms up. Then at Gabby’s, we did not stay long for we stayed for 10 minutes and nobody attended us. Like, the alcohol adrenaline was going so high that we did not want it to stop. The last was OverDraught. The thing I remember was the smell of the sewer. 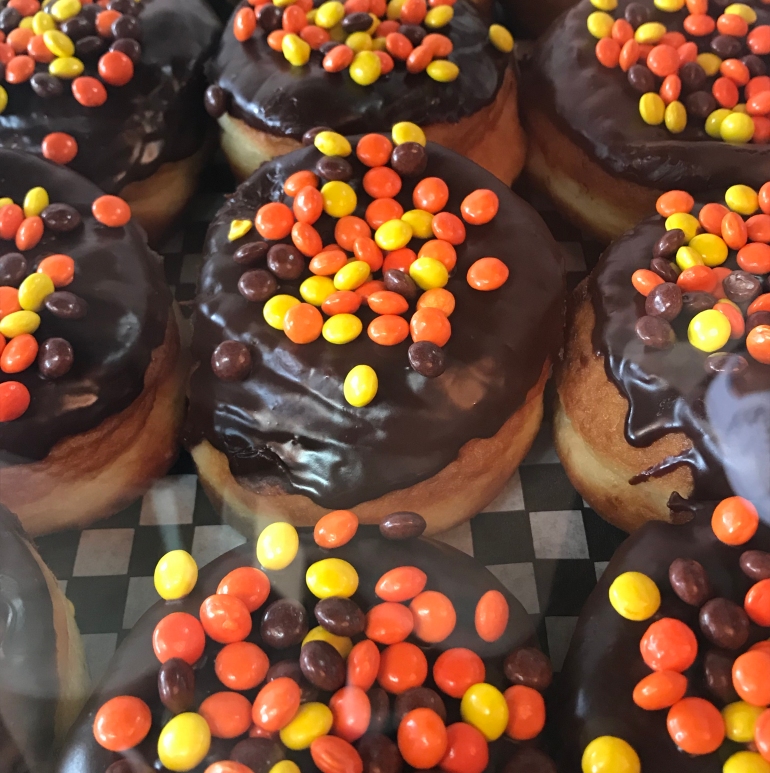 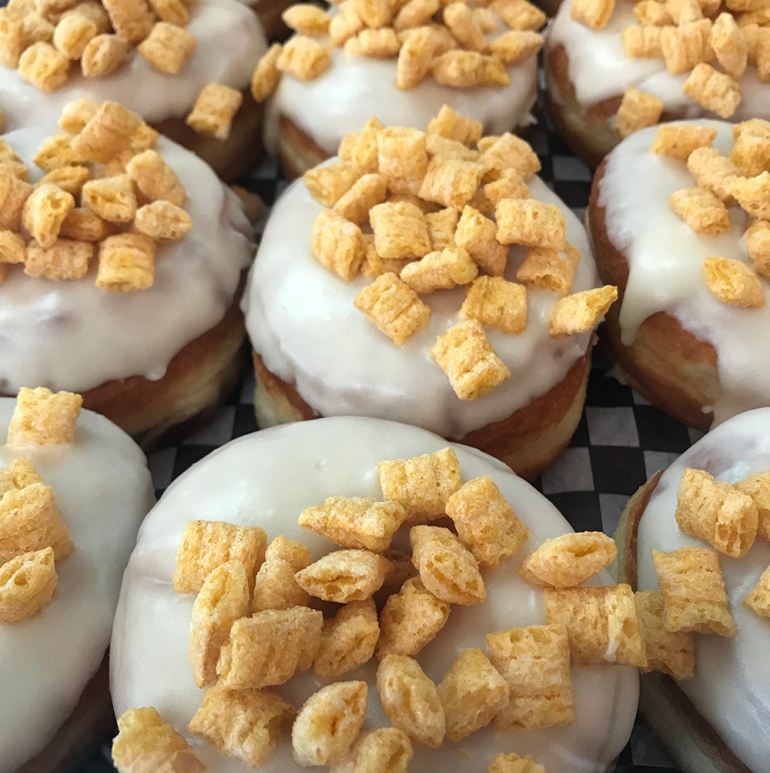 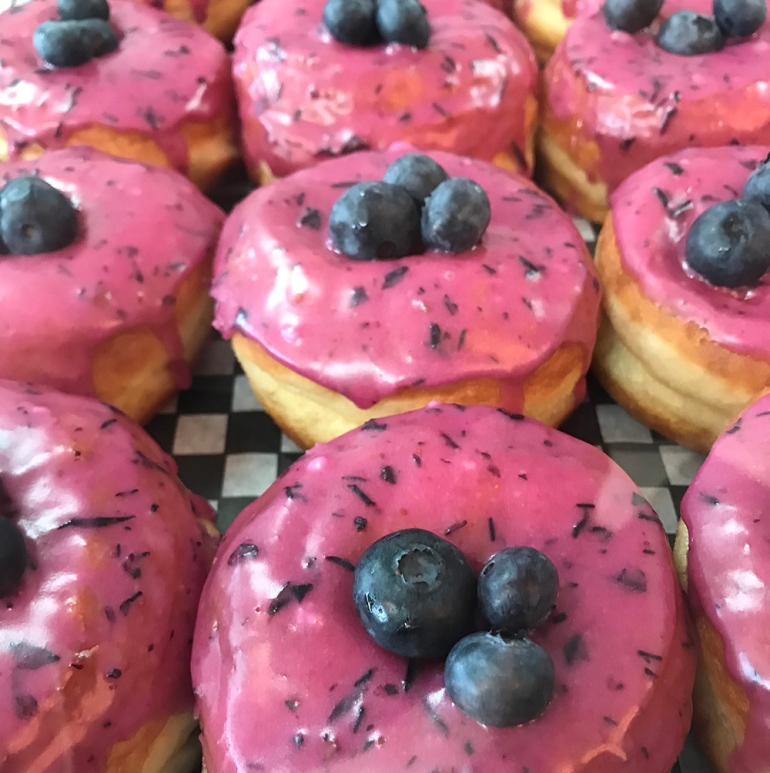 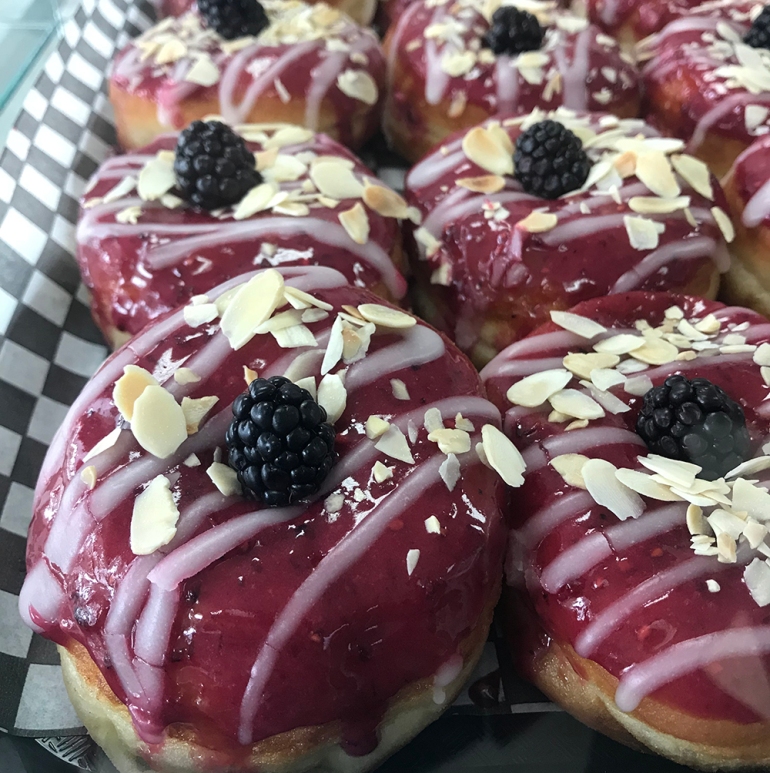 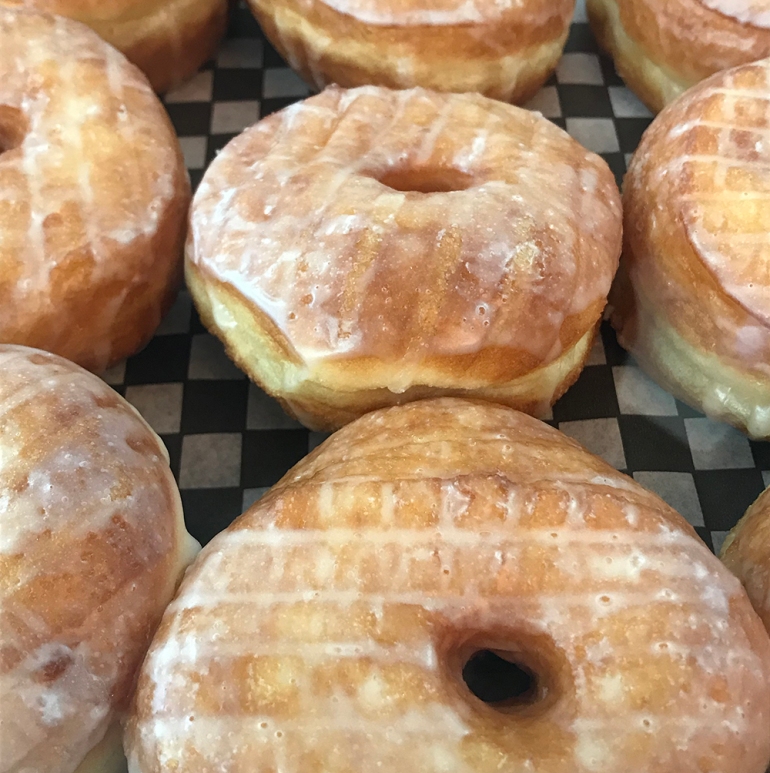 The next day, we had breakfast at Daddy O’s Gourmet Doughnuts. Seriously, the best dough nuts and I will not elaborate.

And when we got to Niagara, we ate at Kelsey’s Grill where we got popcorn shrimp, chicken parm, gimmer bacon grilled cheese with garlic parmesan fries, spam burger with well done fries, fish tacos, and pulled pork tacos! Sooooo sinful. Haha! 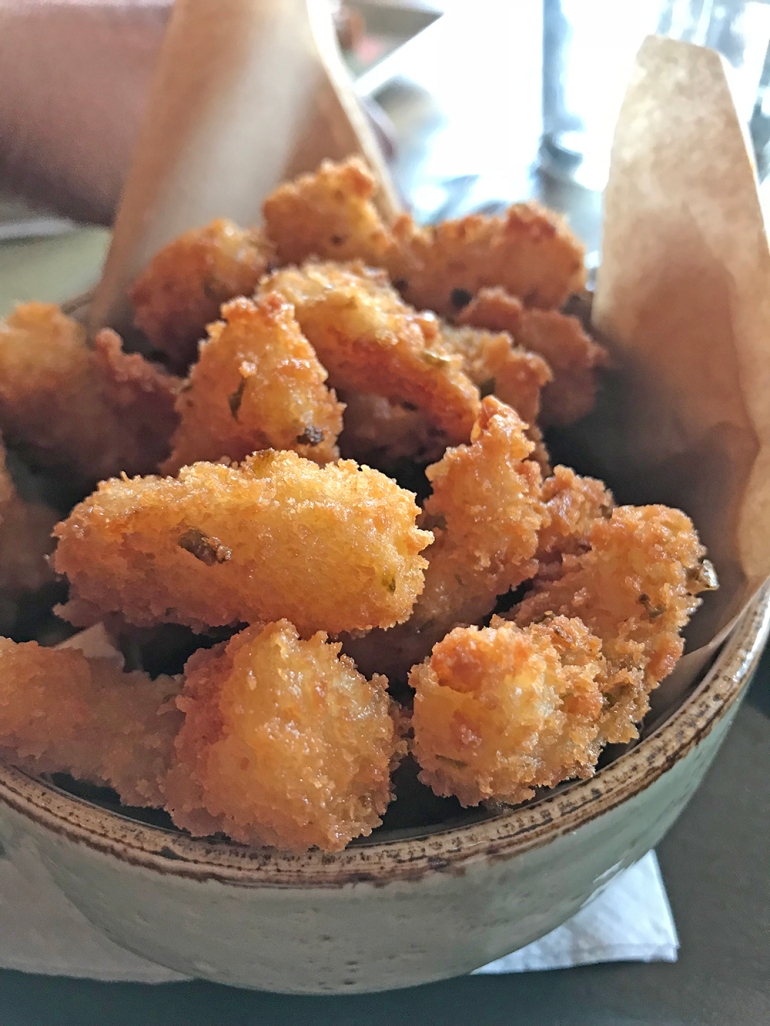 And one of the best food hunt is the unlimited steak at Brasa Brazilian Steak House. Just flip this thing in green side and you’ll get  taste of all the kinds of steak from beef top sirloin to rump steak, from rib eye to bottom sirloin, from beef ribs to chicken meat, from lamb leg to brazilian pork sausages.

And when you get “umay” (fed up or sated because there is no direct English for that), you can get a slice of the grilled pineapple. Just like how crazy in the world pineapples got along with pizza, this fruit, if grilled, is perfect with steak. 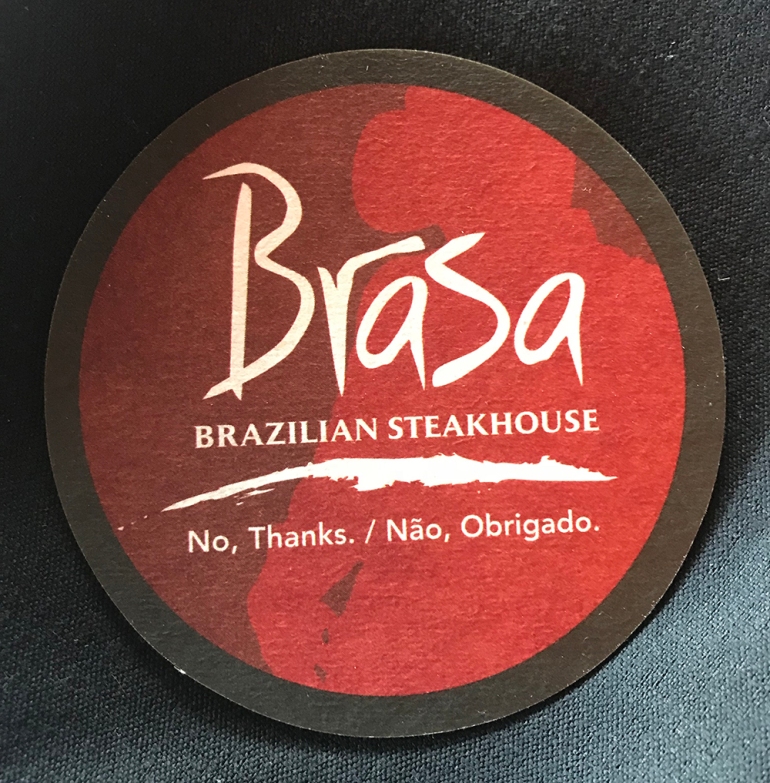 I cannot really remember the details of the diversity of the food, it was really the company and the stories that made it all oh so fun and memorable.

And of course, I tried Poutine!

So how exactly gastronomic Toronto is and can be? 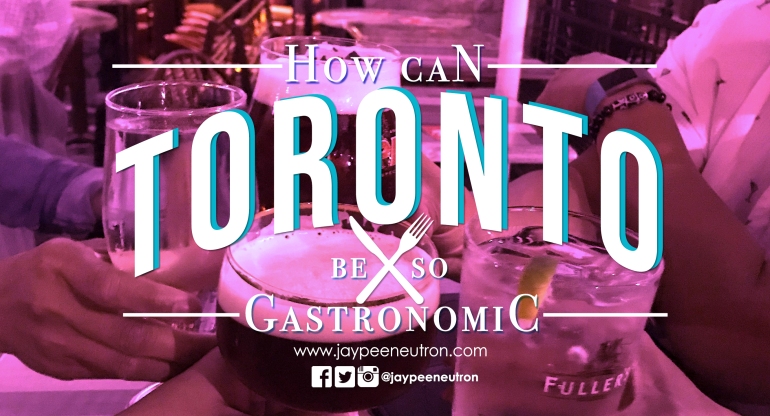 The answer is, “overwhelmingly” that while you take a bite of a medium rare steak at Bardi’s that you get to forget the calculations of a Persons With Disability ramp that you formerly know and just get on cloud nine, up high, eyes closed, like a celebrity with your die hard paparazzi upfront and you do not care except finishing your steak.

epic camp night at the gem of the east
caveat: summer feed ahead
summer came early
ang gara ng mansion ni imelda
your days are counted as the longest bridge hun
don’t you dare turn your back on me douglas 😷