Towards the end of an eleven-hour ride, I caught a vague sight of Sagada, the Mountain Province’s Pride, mostly swathed with fog leaving us 12 degrees frozen especially it is February that it is the coldest. Looking back in 2014 when it became a social bandwagon to visit the place because of the movie That Thing Called Tadhana, people from the metro have already had the crunch of why it has been a cool place to go to, literally and figuratively; thus I decided to have a taste of what it’s like to have the #SagadaFeels by myself.

THE JOURNEY TO #FOREVER

Start snapping your smiles while they last for when you get to rev up the roads to the Mt. Province, you’ll see how those smiles turn to shrills. We took off from SM MOA, Seaside Boulevard, Pasay at around 10 in the evening after my three hour jam from NAIA Terminal 3. The Sagada trip was packaged with ten pax in a Hi-Ace Van through Biyehero.net. It was a good thing that Joyce (in blue university jacket), the bestfriend of my good friend Clarisse (in yellow sweater) invited me to hop in the trip with her colleague, Gemma (in brown cardigan) and RB (with the camera strap). I was the only one not from the metro so I had to avoid talking in my native tongue.

Leaving the urban sprawl of the metro, we had so much fun prepping for the long ride and the long, fun talks.  I felt famished so they got me a fastfood chicken to fill me, I got them two packs of piaya, a local delicacy which I brought from Iloilo, and for the longer journey, the dainty yema cake. Indeed, food will always be the most basic need even in your being a hobbyist. In that way, you’re two steps closer to ‘belongingness’ and security. 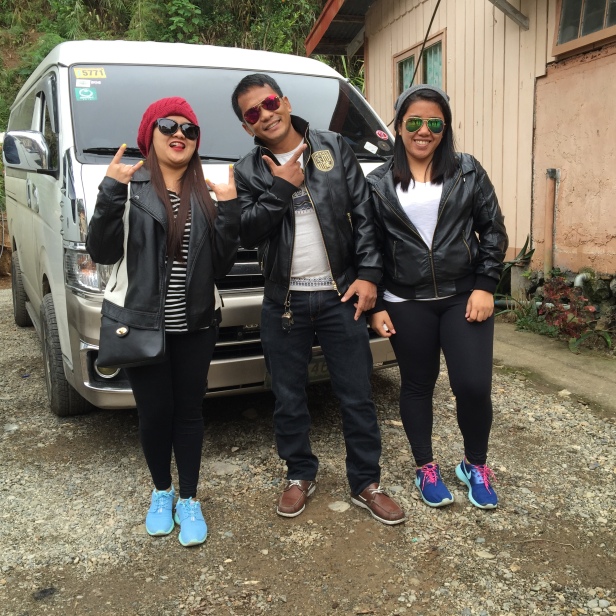 As Kuya Ricky (centerfold, cover boy), our driver, started up the engine, I was certain my Sagada trip will be a rollercoaster. And it literally was. He drives like there’s no tomorrow and swerves in the curves like a little boy pushing a five-inch toy up the kitchen sink. And, I think we had stopovers where one passenger threw up in the wee hours of the morning twice. I, on the other hand, composed myself and hid that I was acrophobic (afraid of heights) so instead of enjoying the high cliffs, I slept…dreaming if my #Forever would be there waiting for me in gallant smiles and gentle eyes. 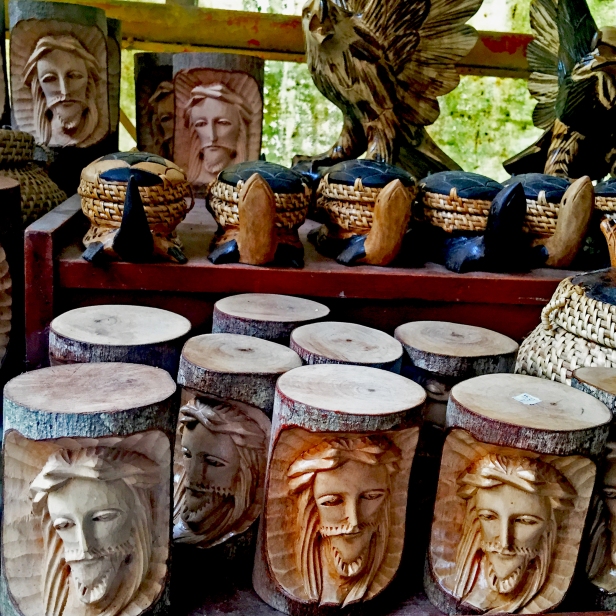 Have your early morning body stretch and revel in the famous Rice Terraces while choosing from these souvenir items, wooden collectibles, and other arts and crafts that can be purchased at some of the stores nearby when you get to Banaue.

This is Tudandi, an 85-year old native from Tuwali tribe of the Mt. Province. He lives in a ‘kubo‘ (hut) over the side of the terraces where we met him. He has four children and he wears jogger pants at home, of course I’m kidding. 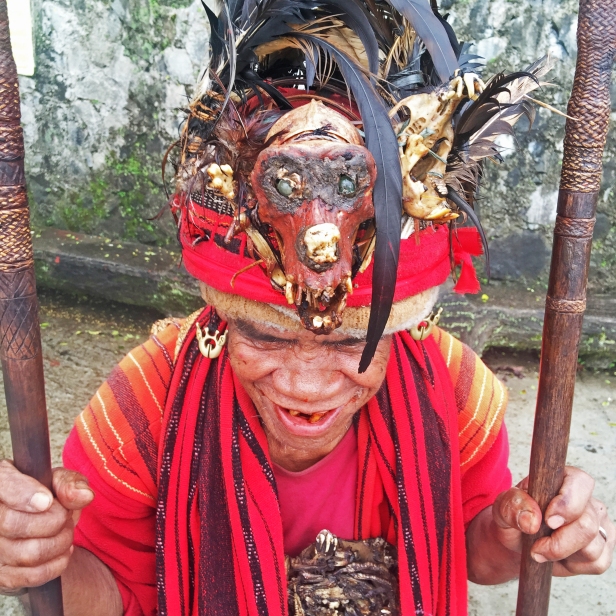 Matched with his traditional ‘bahag‘ (loincloth) are some weird accessories made from dog skulls and chicken bones and feathers. He doesn’t smell though; he dried them up so well.

What’s more fun is me getting surprised how he fits in the trend of the wacky, action-packed and even serious camera projections. He even taught me the proper positioning of the spear when in combat and the tiger look that supposed to steal the scene.

Perhaps, the long weekend is not an absolutely perfect time to go to Sagada after all. In case you loved the scenes of JM De Guzman (Anthony) and Angelica Panganiban (Mace) piping down and chilling out in the pine-boulevards, well that is definitely about a person directing his invisible hand to make good of what is bad about it and it is, yes, the heavy traffic that’ll top it all. 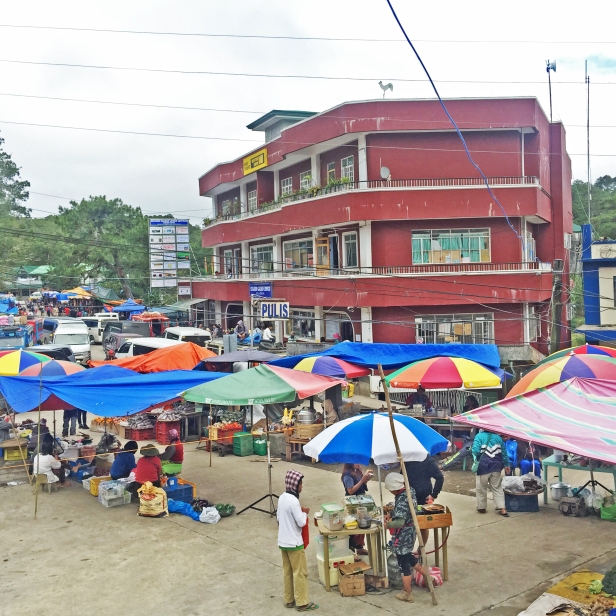 The place is just too congested for automobiles especially that almost everyday seemed like market day in there. Just like the recent news about overcrowding in Mt. Pulag, I guess the good government has to take actions about it especially that travel agencies let tourists swarm in the line without enough guides that end up compromising the original itinerary for the guests, resulting mostly to disappoint to dismay and letdown. 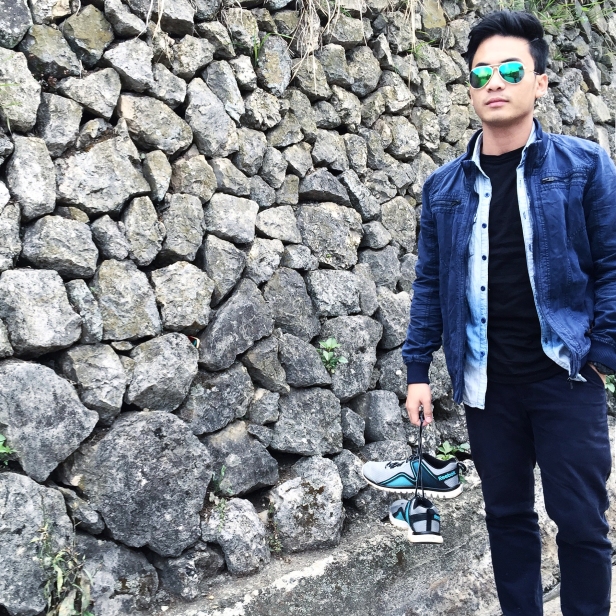 Apart from the #SagadaFeels I have wished for, which was supposed to be laid back and serene, what I loved about this place is any spot can be picturesque, even to the basic ground and the rock terraces where houses and restaurants are mounted. Enjoy the freezing breeze and bring whatever you want, be it a pair of running shoes or a bag of ukay-ukay items (pre-loved for the social climbers and high end donations for the ‘others’).

So after a night of not being able to satiate our tongues with our ambition of an exploding gastronomic outburst in Sagada to which I believe we truly deserved because of the hours of treks and hikes, we found ourselves in this small restaurant named Cafe Meals. They serve very generously, something that any Filipino citizen deserves nowadays.

One crucial tip: Not all restaurants stay up till nine in the evening, most of them close at eight so in case you end your day itinerary later than that, get a reservation or you’ll end up eating an acrid binagoongang kangkong (spinach stirred with a locally made shrimp paste) and a tasteless nearly sweet sinigang na baboy (sour pork stew) somewhere unsanitary.

Where else would you chill when it’s 12 degrees deep freezing and Sagada Brew offers a wide range of hot coffee and non-caffeine delight. For the coffee shop lovers like me, try this hub. Just make sure to sip in the hottest possible coffee moment you have for before you knew it, you mug rims have become colder than your ex’s heart.

While others say that the journey way matters than the destination, I call for the exemption of Bomod-ok Falls for when you get to lay your own eyes on this grand masterpiece, your knee pains and your walking stick will only play as accessories to the crime and you’ll attest yourself the journey and the destination are never enemies.

The view you get towards the falls, the little boys lifting forty-kilo blocks of wood up the mountain trails with very good set of teeth and the stories of natives in their galvanized iron roofed and walled homes are but endless photo albums in my memory.

Also known as the Big Falls, Bomod-ok Falls is a 200-meter waterfall sheltered behind rice paddies and small mountain villages. The trail is easily navigated without a guide though for a non-native, it would be best to have one and we had our own since we were on a tour package.You are mistaken if you think it’s a short hike. For a normal pace, you can reach the area in an hour but since it was a long weekend and the traffic was tragic plus the mostly descending trails that caused my friends a knee-jerking walk, we finished the to and fro for almost four hours. 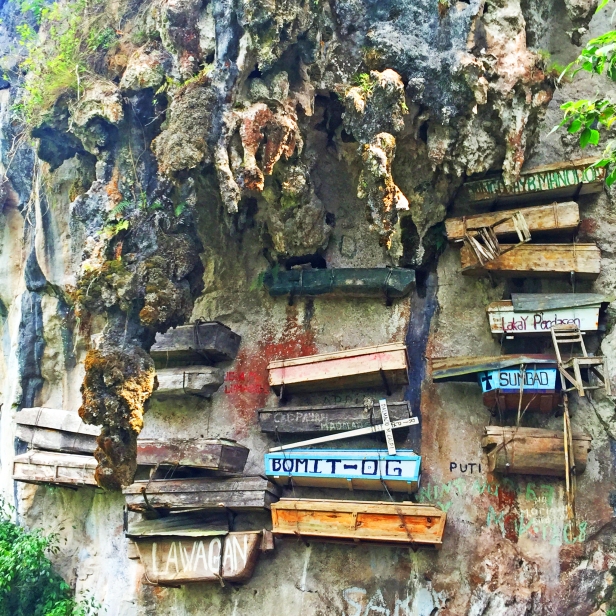 For this trip, Hanging Coffins in Echo Valley, Sagada was on top of my wishlist. While it is very unorthodox to have your loved ones hanged on a mass of rock or cave in this day and age, I fancied the reason behind this interesting practice so when the tour guide shared the story of the tribe behind it, I found it very logical enough.

According to Larry (who, when taking a photo of us, counts “one, two, three, SMELL!”), a dead body is dried on a wooden chair (you see, some of them are attached) before putting back in the coffin in a fetus-like position. They are not buried but are hanged on the rocks in a far away mountain so when All Souls Day comes, the dead can easily get out. Something that is of course difficult when you are buried six-feet below the ground.

This is predominantly reserved for Igorot elders only; they even call it FBI or Full blooded Igorot. The latest one to be hanged in there was in 2010. What’s more interesting is that family members of the dead may also wish to carry the corpse to its coffin at the cliff edge so the bodily fluid, which they believe to contain the talent and luck of the dead, will contaminate them.

The hanging coffins in the Echo Valley is certainly create a haunting but fascinating resting place.

THE MOUNTAIN AND THE CAVE 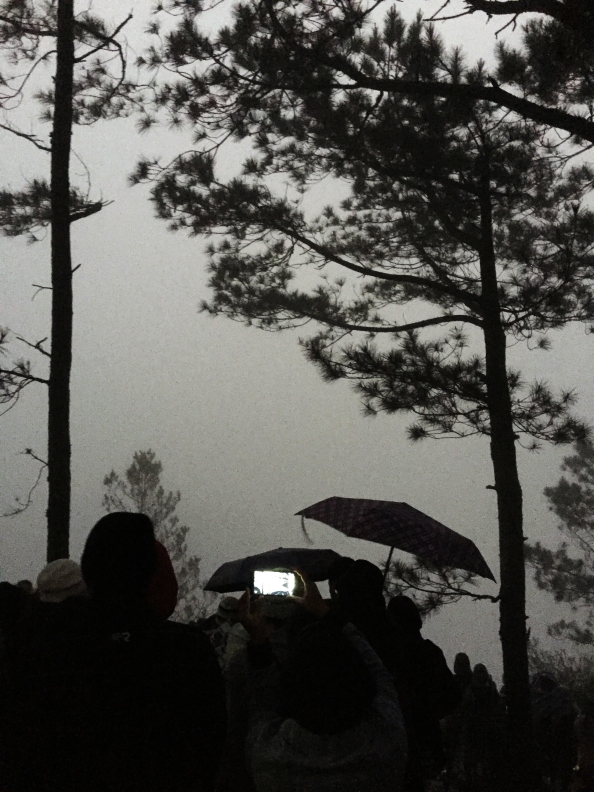 One popular scene from TTCT was when Mace poured her heart out at Mt. Kiltepan by cursing the winds and screaming at the top of her lungs. We didn’t want to do so because we were side by side with more or less two hundred other people waiting for the sunrise.

“Maghihiwalay din kayo” (you guys will break soon, too), I shouted, instead. Almost every couple, who were hugging had a look back at me and I pretended like I was texting someone. So yeah. It was a bitter place for me. 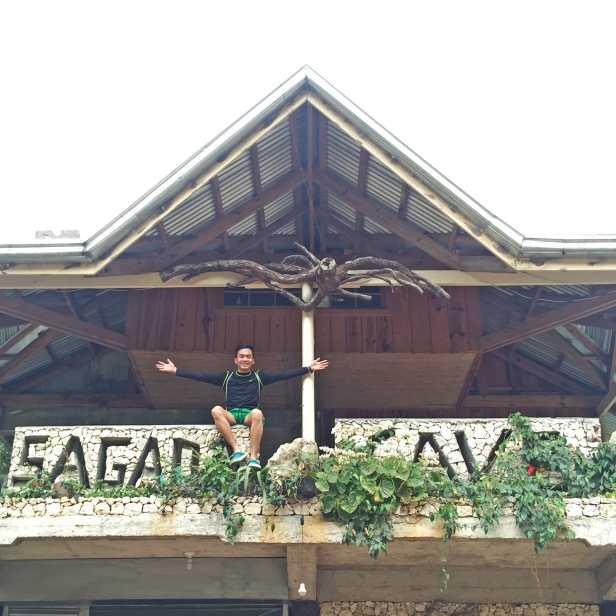 From the top, we went to the bottom of Sumaging Cave. I have gone to the Underground River but this was more fun. 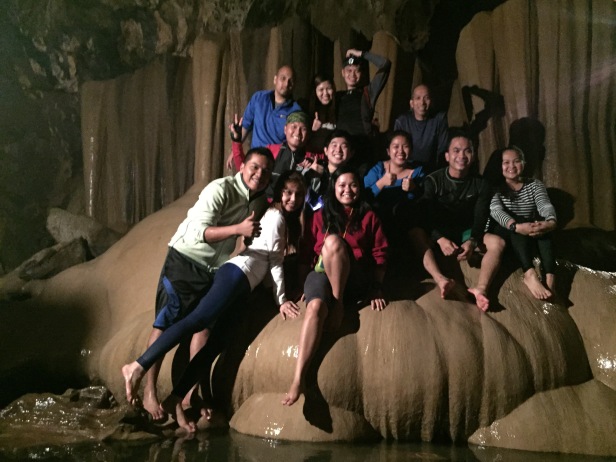 It is fun taking the trail for you get to meet good people along the way who will airdrop you the photos in case you want your phone to be safe from being dropped into the mini swimming pools. I suggest you wear shorts or flip flops. Your shoes will be pointless inside for when when you reach the middle part, you’ll leave them somewhere dark and you get to go barefoot down to the beautiful rock formations.

Unlike the Underground River where you are prohibited to touch the stalagmites and stalactites and even the raw waters inside, in Sumaging Cave, everyone sets foot on the yellow colored dimensions. Something I foresee will destroy the natural beauty of the cave. So while in Sagada, take nothing but pictures, leave nothing but footprints and kill nothing but time. Hope dogs can read the “Bawal Umihi Dito” sign, so men can adhere to this reminder.

Before we got ourselves the sweet escape and time to rejoice the long weekends and holidays, this is a memorable snap for I have come back to Baguio City after five years. Before, it was a national competition so I didn’t get to enjoy that much. Now is different for the money I used is the money I have worked hard for. Ah, how fulfilling, isn’t it.

Snapping was made more fun with this cool people. Photo taken during our stopover at the Highest Point of the Philippine National Highway System in Benguet on our way to Baguio City where the winding road was more intense than I have expected. It was a Peak-A-Boo having the best 360 degrees vista of the 7400 ft. elevation with a hot cup of instant noodles with the three teaspoons of kapeng barako (coffee varietal grown particularly in Batangas and Cavite), a floppy raisin bread, hard boiled eggs, and chitchat with new friends and some highway patrol group officers in fully badge apparel.

Now is your time to move mountains, not just in your own daily merits and shortcomings, but in a place where you can be yourself, by yourself while becoming a stronger you.

Keep on snapping smiles and collecting memories. Travel to Sagada, the Pride of the Mt. Province and see for yourself the secret of this hideaway and you might secure yourself your own #Forever.