If my 2014 was a circus, my 2015 was a funeral. I only got three out of ten from my bucketlist and I just felt like this was not a year for me. And when mourning was the last option, I realized that travelling was way funner – something that can help me recuperate more and faster than whatever medicine or friendly advice. 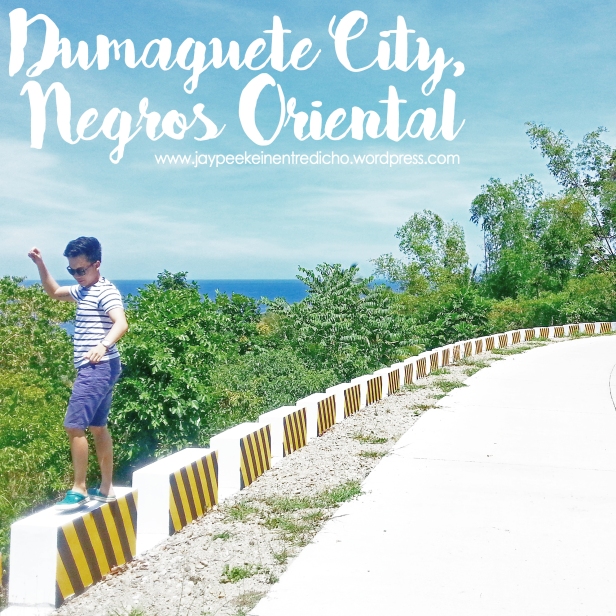 It was Holy Week when we decided to go to Dumaguete City and that was when I had one ‘buwis-buhay‘ (death-defying) experience. At 3:15 am, it was my first time to have seen an impending stampede when the mob tried to swarm next to the bus even if it has not yet parked properly. Hungry for the limited seats, they jammed even the windows of the bus just to get in, and with my backpack, I pushed myself into the crowd enough to secure seats for my buddies, almost getting myself in a fight with a stranger.

When that was over, we found ourselves reveling in the scenic spots of Negros Oriental on our way to Dumaguete City tagged as the Land of Gentle People.

We went to Balinsasayao Twin Lake in Sibulan and Red River Valley in Valencia. If Bacolod has ‘Pala-pala Street’,  Iloilo has ‘Breakthrough’, Cebu has ‘Sutukil’, Roxas City has ‘Baybay Roxas’, Dumaguete City has the ‘Boulevard’ . After a day’s nonstop roadtrip, the seafood dinner at Hayahay & Lab-as owned by the Alcantaras at the Boulevard overlooking Cebu is a good cool down. 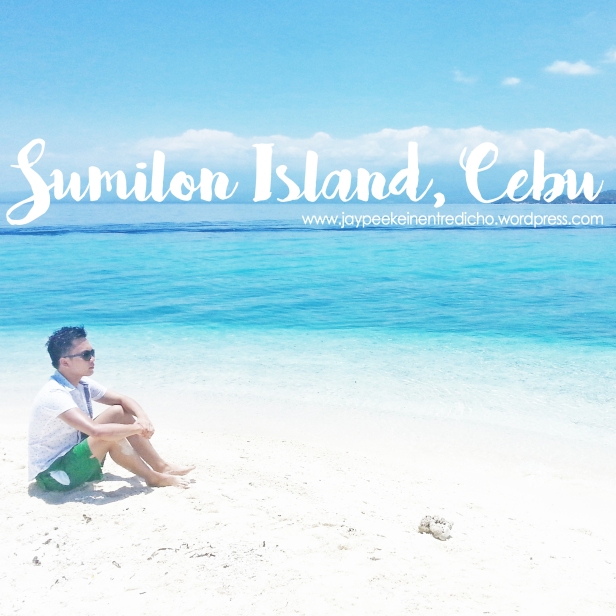 April 3, 2015 is the only day of the year that whale sharks get to have their own holiday. We hence failed to see them, prolly the reason we have to go back there some other time.

As an immediate decision, we resolved to go to Sumilon Island to see the white sandbar and wonders under the sea. The package is overpriced and not organized. And what alarmed me the most is the easy destruction of the 4-ft coral fields. They may be appealing to the eyes when you go snorkling but having seen the young but broken coral reefs, I guess i don’t know.

I hope this story gets answers. Check out full story at Four Days in The Land of Gentle People 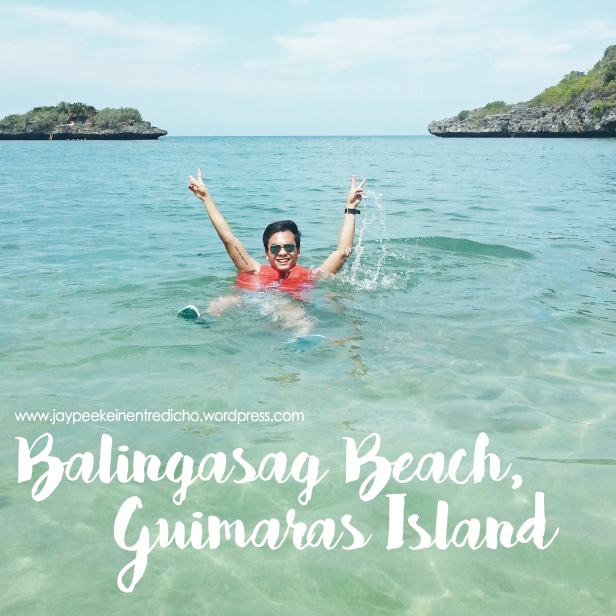 I have been to so many islands and islets in Guimaras Island of course because I was born, raised, lived and have been working there. One may catch that as a tedious social life but living in this island makes me realize that I am lucky enough to be spending much time with my family, working for the public, free from traffic and pollution and just healthy living.

We went to Palwit Island, Panobolon Island, Sto. Niño Island Resort and all the beach resorts along Nueva Valencia, the tourism capital including the Suba-Malawig Eco Tour (Mangrove Forest).

On the other hand, I fancied Balingasag Beach Village in Brgy. Sinapsapan, Jordan town the most perhaps because I was there with the family but the place is just fantastic, baby. It is tranquil, not expensive and you can play hopping in the many islets and beautiful rock formations around it. 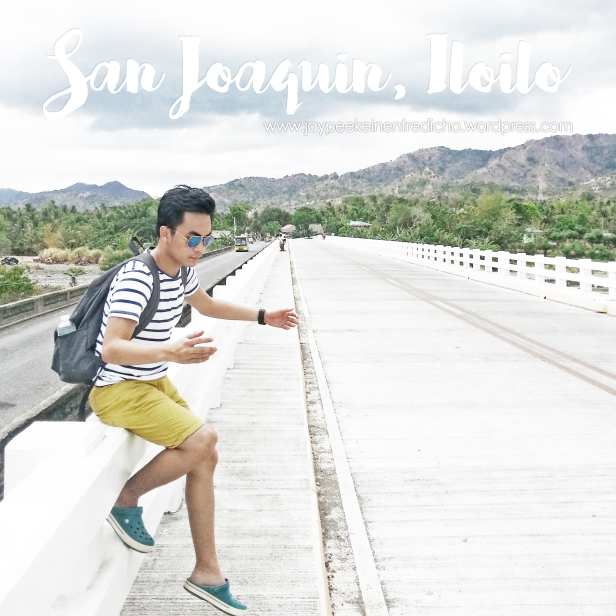 My 2015 summer getaway was more of a bandwagon more than a destination. Chic photos of their sophi-Balesin resembling furniture boosted its appeal through social media and tickled my ankles so we went to San Joaquin, Iloilo Province to visit The Assemblage Point and Convention Hub.

The nearly 10-kilometer bus ride aches will be compensated by the ‘relative’ enjoyment you can get upon arriving at the Assemblage and its amenities, the playground, the infinity pool, the verandas, the convention hub, and water sports activities. 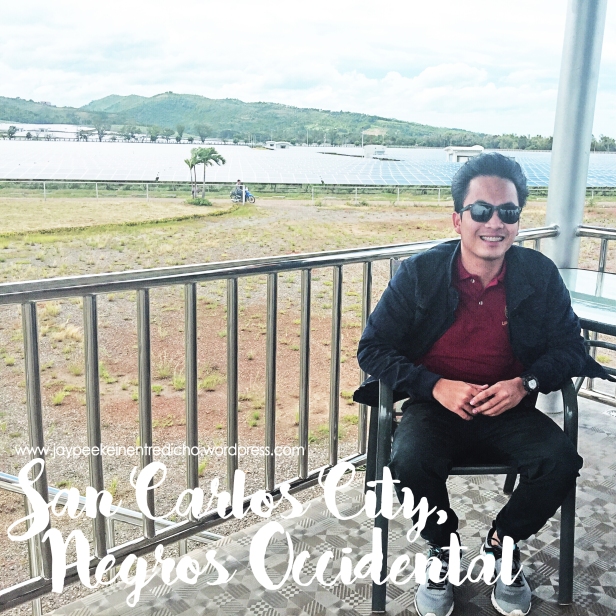 More than just having a once-in-a-lifetime chance of getting educated of why San Carlos City is hailed the Hall of Famer of the coveted Galing Pook Awards and other award giving bodies recognizing good governance, going to Campuestohan was much more exciting and tough at the same time; (exciting) because I have been dreaming of going there for months, and (tough) because of the mid-term exam that awaited day after the trip.

‘Where Green is Go,’ the accredited iconic tagline of the green city, a strong microcosm of their driven spirit for development not compromising the finite resources of nature. With the help of our coolest professor, Dr. Barrera, we got the chance to meet and greet Mayor Gerardo P. Valmayor, Jr. and discussed about their ongoing program and projects that basically promote sustainable development. 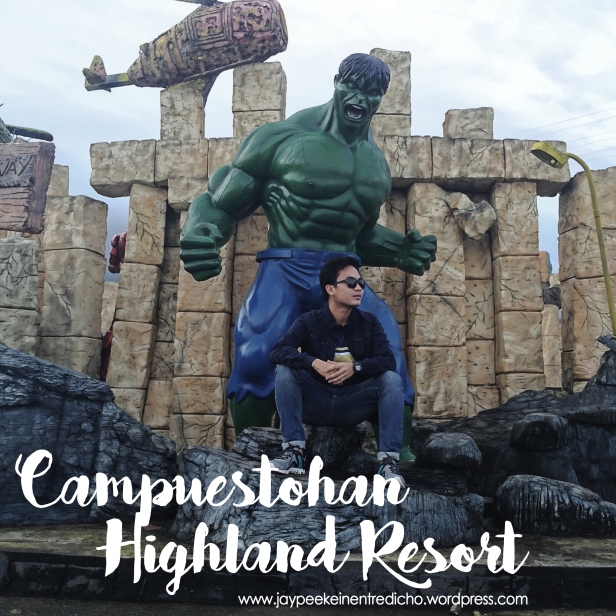 We also went to the Campuestohan Highland Resort, located at a semi-plateau some distance away from the pinnacle of success of Mt. Mandalagan in the City of Talisay in Negros Occidental, Philippines.

So many rides you can choose from. Get your guts enough and go skybiking, hamster and even third wheeling.

Click this link for my adventure blog about it Campuestohan Highland Resort: A Quick Blend of Adventure and Education 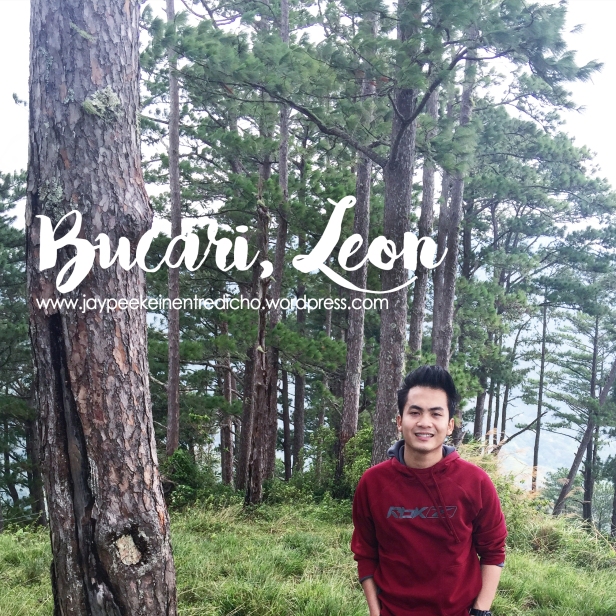 One awesome thing I have realized on that trip and trek was to educate myself more of what life can teach us. I actually don’t know where that came from but maybe from the serenity of the place and the story of one kid we met who quit school.

I have also tried some shadow photography techs on the kids. As they stayed carefree on the dead tree, they carved names and love stories on the bark. They ended up guiding us of where to go because when the rain started to re-pour, they helped us secure a place and so we shared our baon (food supply taken on a journey) altogether which was really so much fun.

For the drama in the skies, check out this link for full story: Trip and Trek to Bucari Pine Forest 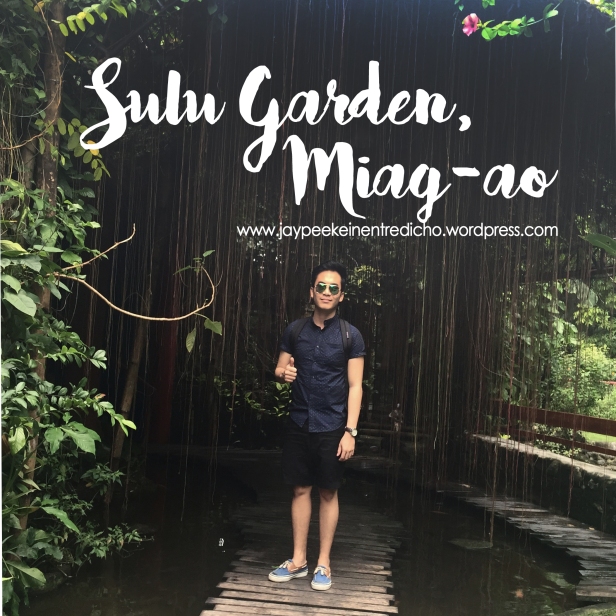 Sulu Garden in Miag-ao, Iloilo has miniature Japanese landscapes that crates and ambiance that is so refreshing. Just an hour drive south of Iloilo City, revel on its yummy Japanese and Filipino dishes or if you want some unconventional meet ups and events, this hub is a must-try. 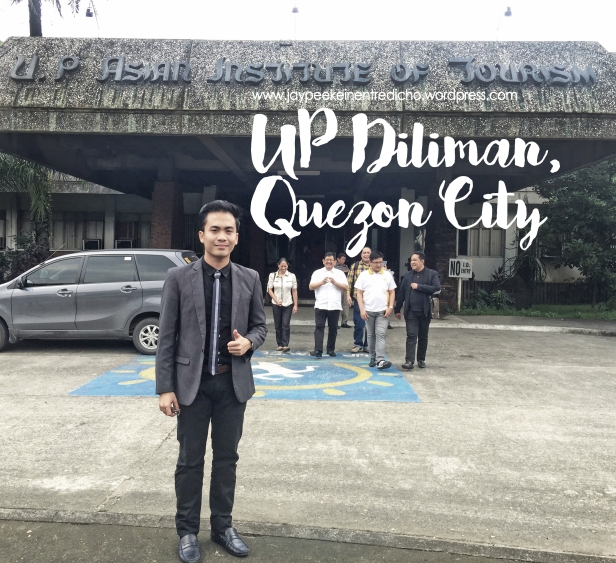 It was my first time to explore the University of the Philippines-Diliman in Quezon City. Decided not to stay with my colleagues thinking I was smart enough to live on my own given the tight budget. I ended up staying with them in the hotel next to the defense venue of the 2015 DOT-ATOP Pearl Awards because I had a hard time going around UP.

Luckily, our project placed 1st runner up after all the deliberations and butterflies. *fireworks* 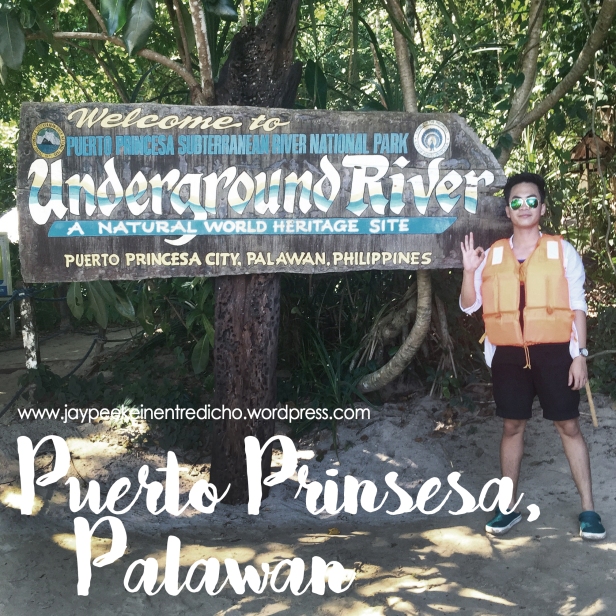 Aptly nick-dubbed as the City in a Forest, Puerto Prinsesa offers a wide range of tourist destinations from the world-class Underground River, Honda Bay island-hopping tour, trails and trek adventure, river cruise, wine and dine, or city and heritage adventures. We went to Honda Bay where we have seen Cowrie and Luli Island, Pambato Reef, Baybay as their version of Roxas Boulevard, Ugong Rock Adventures and of course, top of the list: the majestic Underground River.

This is what I like about travelling. I get to meet different kinds of people while sharing stories of fun through photos and words. I have unearthed the wonders of Puerto Prinsesa in two days. It’s your turn, my friend. 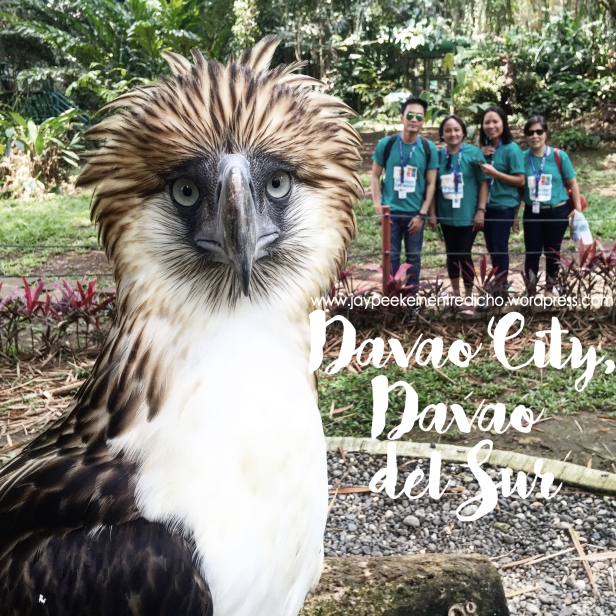 When in Davao, you might think of having a selfie with Chief Duterte and co-exist with your countrymen from the safest city, or prey on a durian fruit that is hell in smell but heaven in taste. Davao is more than what meets the naked eye.

There, I have met the royalties:

Durian, the King of its Class

Mt. Apo, the Tallest Mountain in the Philippines

Waling-waling, the Queen of all Orchids, and

The Regal Philippine Eagle, the King of the Skies

For the royal encounter, check it here: A Courtesy Call to the Davao Royalties 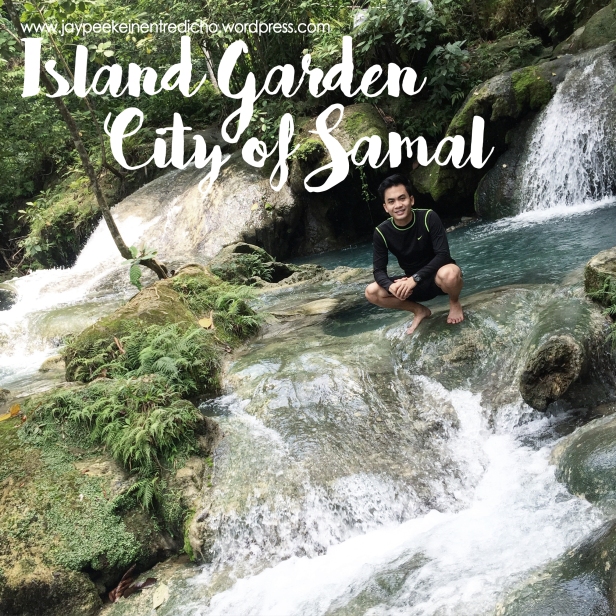 When in the Island Garden City of Samal, we hopped on the nearest sites that we can enjoy like in a day.

Maxima Aquafun sits as the only World Tarpaulin slide that drops you into the sea. You can enjoy swimming, snorkeling, kayaking and fishing and island hopping while Hagimit Falls clusters high, deep, minute and giant water forms to an arresting beauty to dip and splash. One unique feature of one of the largest falls they have is the human size chink behind the waterfall that cylinders down where you can glide through and squeeze your beer belly to fit in and submerge five seconds underwater and find yourself at the bottom of the falls. 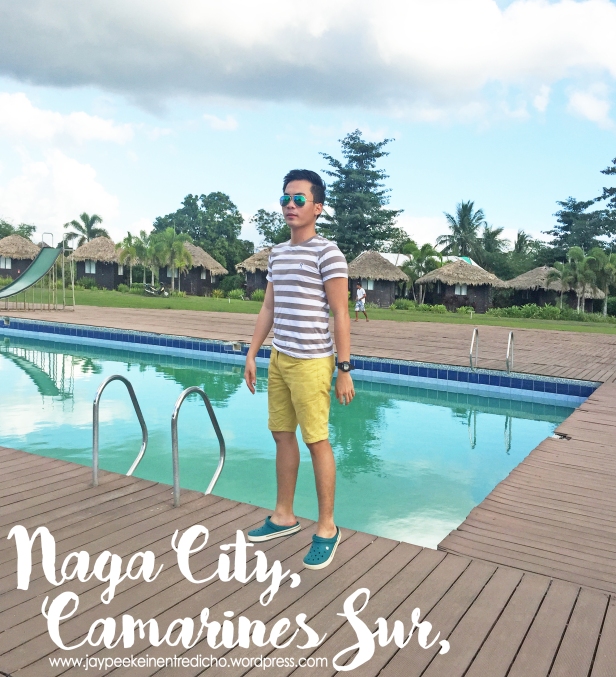 Last on the list is my quick trip to CamSur in Bicol Region where I completed my top three travel wishlist – Underground River in Puerto Prinsesa, a good place in somewhere in Mindanao (Davao Trip) and having a taste of the famous Bicol Sili Ice Cream.

Bicol is so special for me. You can ask me why and we can have a cup of coffee to top that to make this blog post more substantial and not lame: Chilling Quick in CamSur 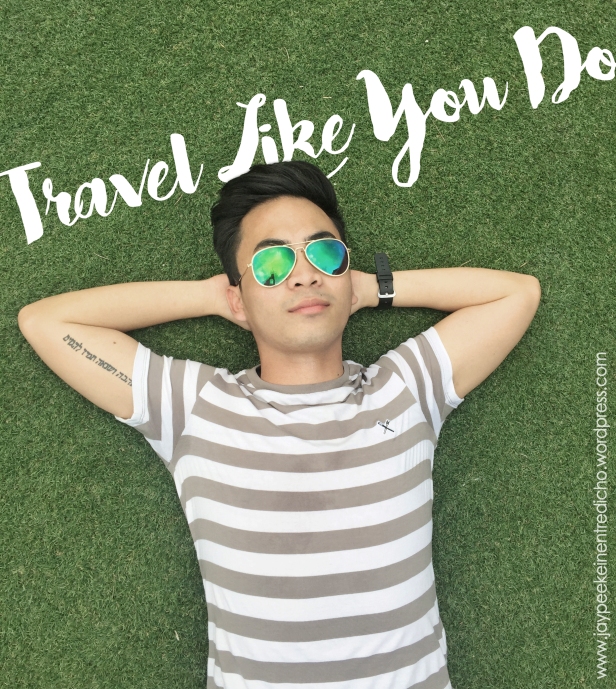 So there you have it, monkeys. My travel recap for the year 2015. Hope you loved my adventure and got annoyed with some of my stories.

Travel like you do and you can never go wrong.